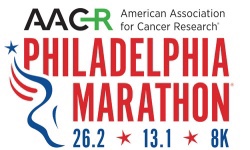 After almost 2 years, I finally happy to toe the line at my first marathon since the pandemic wrecked havoc on the world and running community. The race…Philadelphia Marathon. I was scheduled to run this race last year and deferred to this year, rather than getting a refund. I admit I was still a little nervous knowing I would be in the presence of thousands of other runners, not knowing if they were has vigilant as I was in trying to stay safe during the pandemic. My worry eased a bit, when we received an email from the Philadelphia Marathon about 6 weeks prior to the race that they were requiring all runners to have proof of vaccination to participate. For those that didn’t want to do that, the option was provided to go virtual or defer to 2022.

Now that I decided to run the race in person, the decision loomed on whether my family would make the trip with me. We ultimately decided that they would not because my son is only 4 and we wanted to protect him. Although I really wanted them there, and ultimately I think it played a part in how I ran the race, I think it was the right thing to do.

The marathon was on Sunday, I decided to arrive on Friday evening so that I had a day to just relax and rest my legs heading into race day. The half marathon was ran Saturday, so I was able to walk a block from my hotel and see the runners come through. After cheering on the runners, I took the half mile walk to get to the expo. They seem to have a good system in place for entry, with one line for runners with their vaccination cards and another for the runners who uploaded their cards to Crowdpass ahead of time(i was the latter). I also made the decision to purchase my items online, so all i had to do was pickup them from the store. The expo itself, left much to be desired. It was very small for a race this size but I am sure Covid restrictions paid a part in how many vendors were allowed in the establishment, etc.

Race morning arrived, I woke up about 3:30am to begin preparation. Temps were in the high 30s, so I opted to bring a throw away jacket since my legs rarely get that cold. The race provided shuttle buses from several locations downtown, one being about 50 yards from my hotel. I hopped on the shuttle that left about 5:15am. All runners were required to mask up on the bus. We arrived at the starting line about 10 minutes later and got through security without issue.

Race began promptly with the elites being sent off a couple minutes after the wheelchair participants. My wave starting around 7:15am. It was good to see so much crowd support out there, it is probably one of the things I missed the most during covid shutdown. One thing I noticed around mile 4 was…there were way more hills than I was expecting. The Philadelphia Marathon promotes itself as “flat and fast”, but it was anything but flat. Luckily, where I live is lots of hills so I was trained for them…I just hoped I didn’t have to run on them in the race. Lol. The hardest point of the race is probably the miles 19 through 21. This is because this part of the race is a run out and turnaround to head back to finish line. So, you are heading towards mile 20 and you see runners coming back on mile 24-25. The last 3 miles were tough as they were mostly uphill, but I endured and finished with my second fastest marathon time of 3:45(I ran a 3:41 2 years prior). I feel subconsciously, I did not push myself the way I would have if my family was there. I don’t think I wanted to risk anything happening and not having any support there with me.

All in all, it was a great race weekend and Philadelphia did a good job in managing it safely. Thank you Philly and welcome back to IRL racing.